Dean Nicholson’s persistence with the gulls has paid off. Watching at Hykeham, Lincolnshire he came across a yellow-legged Herring Gull in early February 2012. – an ‘omissus-type’. Big news was it had a readable ring on. Well now we can see the bird’s fuller story. I think it’s only the 2nd time a yellow-legged Herring Gull (old Marsh Gull) from Finland has been seen in Britain- the last being an adult found dead in Essex ( I think?). Fascinating stuff! 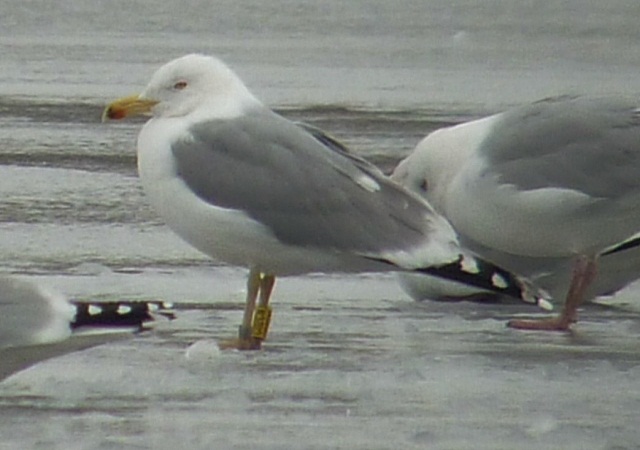 Below are the full details of the Finnish ringed ‘omissus’,

It is confirmed as having been rung at the nest as an adult (female) in Ruovesi, Hame, Finland on 29/05/2007, it was also recorded in Finland at Tampere in 2009 and 2010 and mine is the only sighting thus far outside of Finland.

The legs on this bird were pretty bright and could potentially elicit confusion with michahellis to the unwary. It’s perhaps worth mentioning also that this bird also lacked a full band on p5 (in fact I hardly noticed any black at all on p5?) but showed typical full white tip to p10 and a large mirror on p9.

I wonder if all/most ‘omissus’ types seen in Britain come from the same area? There are certainly some birds which look better than others in terms of leg colouration but this bird seemed better than some I’ve seen with strong yellow covering the whole legs and feet.

It was ringed at the nest along the lake edge (hence presumably where the term ‘Marsh Gull’ comes from?), Quite a few birds I have seen in Britain show intermediate leg colouration with some being consistently bright yellow (like this bird) and some with just a slight yellowish tone…. one bird even had yellow tarsus/tibia but pinkish feet(!)…..

Well at least we now know where some of these yellow legged birds come from…..I certainly would have been more surprised if this bird had originated away from Finland.”

All the best, Dean

Verification of the ring:   Number not verified

I am a Free Spirit
View all posts by Martin Garner →
This entry was posted in Gulls. Bookmark the permalink.

8 Responses to 2nd time in Britain