Eastern Common Tern – did one frequent Minsmere in 2011?

Eastern Common Tern – did one frequent Minsmere in 2011?

In the late spring of 2011, I took a holiday based at Westleton, Suffolk, for a week together with fellow birding friend Tim Wilson and our families. Most days we would venture the short distance to Minsmere RSPB reserve for some birding and photography. During the course of these visits, we had encounters with many terns, but one in particular may be exceptionally interesting.

On the 30 May at 8.50 am Tim spotted an adult dark-billed tern resting some 40 metres from the south hide. Presuming it was going to be one of the few Roseate Terns present we switched to our scopes only for it to immediately fly off over the scrape and disappear seawards. In flight, the jizz looked wrong, lacking the long tail expected of that species. And, as Tim pointed out, shouldn’t it have had bright red legs?! – as his first brief binocular view had indicated the bird possessed dark legs, we scratched out heads and mused over whether a 1st or 2nd summer ‘portlandica’ Common Tern might be the explanation.

Later that week, on the 3rd June at 8.10 am, I was alone in the east hide at the end of a pre-breakfast walk down from Dunwich cliffs. Scanning the scrape, a tern suddenly grabbed my attention, sitting on one of the perching poles conveniently located to the left of the hide. Again I fell for the same trick – with my eyes briefly feasting on the black crown and bill, ‘great, Roseate’ I thought to myself as I instinctively switched to my digiscoping set-up and spent a few seconds slotting the gear over the eyepiece. The very moment the target snapped into focus, and before I could press the shutter button – it took off and started flying towards me. This time, I reached for my SLR and, with some relief, it locked on, allowing a couple of shots to be acquired (Figs 1, 2). Seconds later, the bird had passed the end of the hide and disappeared over the dunes towards the sea. 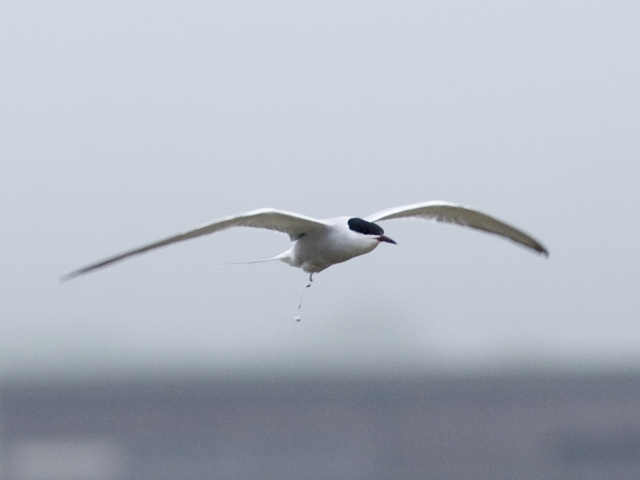 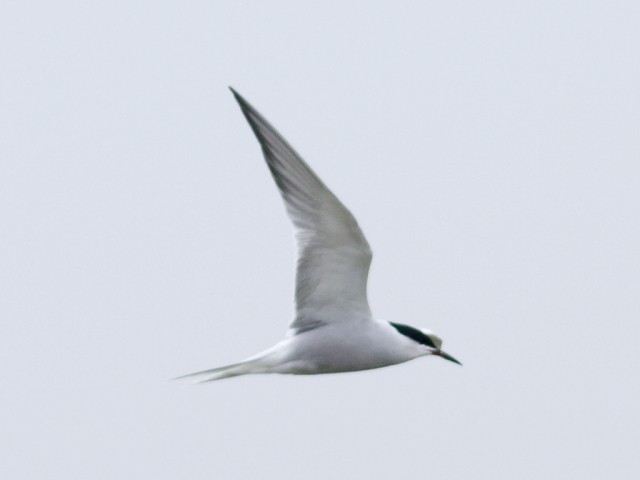 Again I was to be initially disappointed – its dusky not pinkish underparts, modest tail, rather ‘common’-like underwing pattern, with pale semi-translucent inner primaries contrasting with dark-tipped outer primaries and slightly darker grey secondaries, all suggesting Common Tern, Sterna hirundo. However, really bamboozling me was its quite un-‘common’-like bill – modest in length, delicate in structure and entirely blackish along its length save a hint of maroon at the very base of the lower mandible. Its completely black cap and neat body plumage suggested it was in adult summer plumage, but why that funny bill?

With some photographic evidence acquired and the end of the family holiday approaching, I resolved to follow it up later. I was likely to be stymied I thought by the brevity of my encounter and lack of detailed field notes, but, within days of my return, and with excellent timing, I noticed Sean Nixon’s account and photos that had just been published in Birding World (issue 293), of a presumed ‘Eastern Common Tern’, S. h. longipennis, at, where else but, Minsmere on 14 May 2011, putatively only the second record for Britain of this form. Until that point, I had forgotten about the existence of these birds that, unlike European birds, are black-billed in summer. That article, with its insightful additional editorial analysis, together with an update six months later (issue 300), arguing that a second bird was present at Pakefield (& possibly Alton Water), Suffolk 14 July 2011 and another, perhaps third bird, present at Heist, Belgium on 22 June 2011, convinced me that I should seriously consider whether I had fortuitously added a piece to the jig-saw of Suffolk ‘Eastern CT’ occurrences in 2011.

Below I tabulate the known features of Eastern Common Tern (believed to be useful for separation w.r.t. Common Tern) and compare them with the set of features of the ‘East hide’ bird. This summarizes information I have found published in Birding World issues 293, 300 & 303, Terns of Europe & North America (Olsen & Larsson, 1995) and the Advanced Bird ID Guide (N.v. Duivendijk, 2010).

I conclude that the East hide bird of 3 June 2011 shares many of the features associated with Eastern Common Tern, especially the overall jizz and bill colour and structure, although the character set is incomplete because views of the upperparts and leg color were not obtained. No strong contra-indicatory features were noted. Could a ‘western’ Common Tern in summer ever show such a suite of features one wonders? The photos I obtained are not inconsistent with those published in plates 1–3 and 10 of Birding World issue 293 (pp. 211, 214) – if it is an Eastern type, perhaps the bird that Sean Nixon found was more than a one-off visitor to Minsmere in spring of 2011 – maybe it will return!

I thank Tim J. Wilson and Charles Fentiman for discussions during preparation of this note.

2 Responses to Eastern Common Tern – did one frequent Minsmere in 2011?