Posted on October 3, 2012 by danielopezvelasco

Sabine´s Gull (Larus sabini). 15 miles off Carino, Galicia, NW Spain. September 2009. Photographer: Antonio Gutierrez.
About 160 birds are visible on this photo. Part of a 280+ strong flock seen on this trip. There aren´t many places in Europe where you can regularly encounter such kind of  flocks. A truly beautiful sight at sea.

The waters off Galicia (NW Spain) are probably the best, and easiest, place for seeing good numbers of Sabine´s Gulls in the Western Palearctic.

From mid-August to mid-October, very good views of this highly sought-after and beautiful gull are almost guaranteed on any pelagic  trip off the coast of Galicia.

Sabine´s Gulls are not easily seen from land, but, after strong northwesterlies, Estaca de Bares usually offers the best chances. In early September 2010, we had an incredible count of 475 birds flying west from the headland, but unfortunately that´s not something you can expect to happen every year.

On the other hand, they become common in the 15-20 miles offshore area, and, luckily, are readily attracted to chum.

On the average late summer-autumn pelagic, counts of over 100 birds are frequent, and we have encountered some very large tight flocks, of up to 300 (!!) birds, on a number of occasions.

Seeing one of these large flocks get off the water, with hundreds of black and white triangles flying all around the boat, when harassed by a skua is something any birder should experience sometime.

On last weekend´s pelagic, we were fortunate to encounter a   250+ strong flock, still mainly formed by adults (about 75% of the whole group). The day count probably exceeded 350 birds.

The way Sabine´s usually gather around the chum here is quite interesting. Normally, small groups start to fly in, and after feeding for a while, end up sitting in the water. As the groups are usually relatively small (10-20 birds), and are widely scattered, you get the (wrong) impression that not too many gulls have been attracted to the chum.

Sabine´s Gull (Larus sabini). 15 miles off Malpica, Galicia, NW Spain. September 2012. Adults showing variation in the amount of white feathering on the face by September. Some birds are still in full breeding plumage, whereas others are already in almost complete winter plumage.

But that´s until they all get together and take off. Then, you realize the number of small groups that had been arriving,  many times unnoticed, from all directions, was much larger than what you  had thought, and instead of a couple dozens, there were in fact a couple hundreds!

A few days before, a friend of mine , Marcel Gil, who is working on a research vessel, told me he had seen several thousand Sabine´s a bit further west too, so it seems last week´s westerlies have brought very good numbers of them relatively close to shore.

Now, a few close ups from past trips. 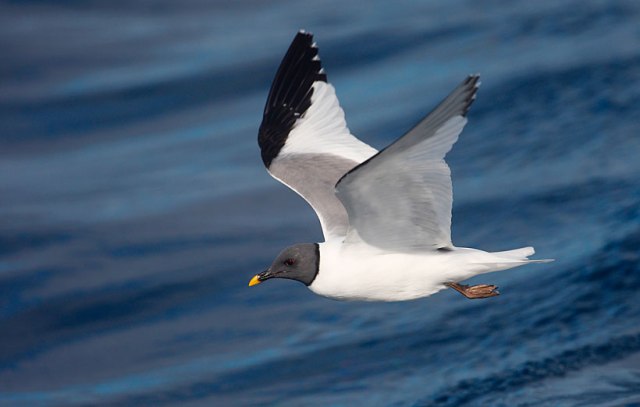 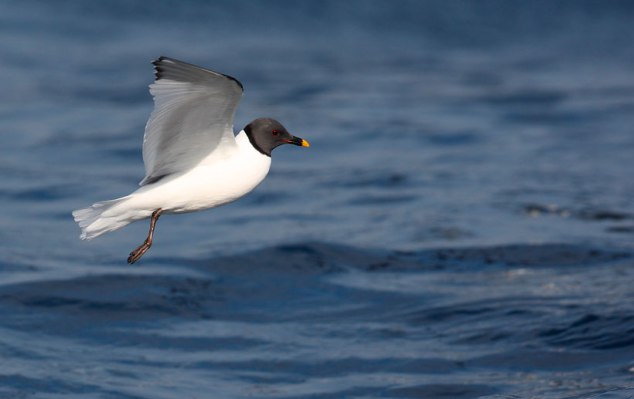 Sabine´s Gull (Larus sabini) and Wilson´s Storm-Petrel (Oceanites oceanicus). 15 miles off Fisterra, Galicia, NW Spain. August 2012. Photo: Daniel López-Velasco.
A lucky early morning shot. Wilson´s Petrels are usually present together with the Sabine´s Gulls on the oil slick, although numbers vary much from day to day. Counts of up to 150 Wilson´s are not rare off western Galicia in late August and early September.