‘Evil Red Eyes’ typed into the Google search engine brings up these images. Just like the piercing ruby eyes of the Black-shouldered Kite. Those eyes, deep-set in black furrows, on the side of triangular Owl-like head, form part of the super charismatic appeal of these birds. Add an apparent Asian (not European origin) of vagrant turned breeder, arriving in the rescued Hula Valley (a whole David versus Goliath conservation story there) and you will meet this bird:

A dream start. The first Hula Bird Festival in Nov. 2011 ushered in another first. A pair of Black-shouldered Kites an otherwise extreme rarity here was found breeding in the Agamon Park. Thankfully the same pair were still present and breeding like proverbial rabbits. Already at 3 consecutive broods- apparently mating and nest building for round two while still feeding young from round one. In terms of the Western Palearctic region, the Black-shouldered Kite is represented by disjunct populations of the nominate form– caeruleus. Some of these breed as near to Israel as Egypt, so surely a likely source of colonisation? In fact the Israeli birds appear to be the Asian taxon vociferus, whose normal range runs from Pakistan east into Asia. Pakistan is about as far away from Israel to the east, as Spain is, to the west.

apparent Asian Black shouldered Kite- ssp. vociferus. One difference between nominate caeruleus and vociferus- well seen here, appears to be the dark shadow of grey over the secondaries. Not as black as the underside of the primaries, but the black appears to ‘bleed’ from inner primaries to adjacent secondaries and overall the grey secondaries contrast obviously with white underwing coverts. The secondaries are normally nearly white/just slightly grey in nominate birds, lacking the obvious contrast. Light plays a big role in assessing this properly. Suppose there might be other subtle differences, to be explored!

So not just a first for Israel but first for the Western Palearctic ( I think), the  breeding of vociferus- Asian Black-shouldered Kite. 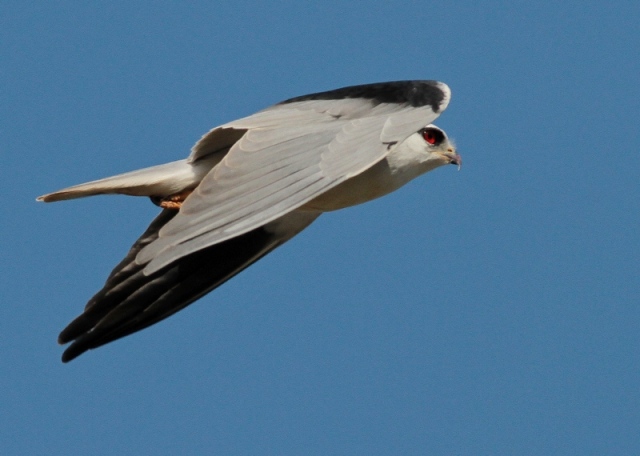 Really benefited hanging out with learning about this stuff from the pioneers: Yoav Perlman, Nadav Israeli, Jonathan Merav and Dan Alon. More on the spread of the kites (since  2011- some 5 pairs have been found in Israel e.g. see Yoav’s blog ) and see conservation in the Hula ,where more should be written Dan’s herculean work to get this all started.

Video capturing some of the first breeding and taken during the 1st Hula Bird Festival in Nov.2012 by Mark Andrews.

Some of the folk on the 2nd Hula Bird Festival enjoying views of Black-shouldered Kite in the Agamon Park.

I am a Free Spirit
View all posts by Martin Garner →
This entry was posted in Hula Bird Festival, Israel, Raptors. Bookmark the permalink.