and the usual cautionary tales.

As fall of 2012-13 set in, many of us here in the States knew a large wide-scale invasion of northern finches was on our hands. Following numbers of Pine Siskins, Common and Two-barred Crossbills, and Evening and Pine Grosbeaks in mid-December, redpolls started to show up in great numbers. What was unusual about this invasion was that it was happening in both the eastern and western parts of the United States. Often invasions only occur in either the east or west, not both at once. By January, Colorado had seen more redpolls this winter than they had seen in 25 years combined. In the northeastern United States, more Arctic and Northwestern redpolls were being reported than usual.

In the small upstate New York city of Cortland, I had the luxury of having redpolls visit my feeders starting mid-December. As any redpoll enthusiast will do, I started my usual painstaking examination of each and every bird. As most know, the variation found in the different redpoll subspecies can throw even the best of the best birders off. At first the variation found in the flock in my backyard was fair at best, but that all changed… Sunday the 20 of January, a new flock appeared… and the variation was nothing like I had ever seen before.

This “new” flock had several very obvious Arctic type birds and a few Northwestern type birds. But as I looked closer and closer, I realized there were some birds that were hard to ID… at least one bird seemed to be large and white enough for subspecies hornemanni Hornemann’s Arctic Redpoll… and another I kept looking at over the next 3+ weeks just didn’t seem to quite match that of any of the known North American subspecies. The rule with Redpolls is to take your T I M E.  Some are, but many are not an instant ID. They need to be seen and studied, mulled over and over again, and discussed, and then often a clear identity emerges.

Here are several photos of various birds seen in my yard or my neighbors yard (i.e. listed as Cortland, NY) and a few other pics from different areas of the northeastern United States to add additional context. 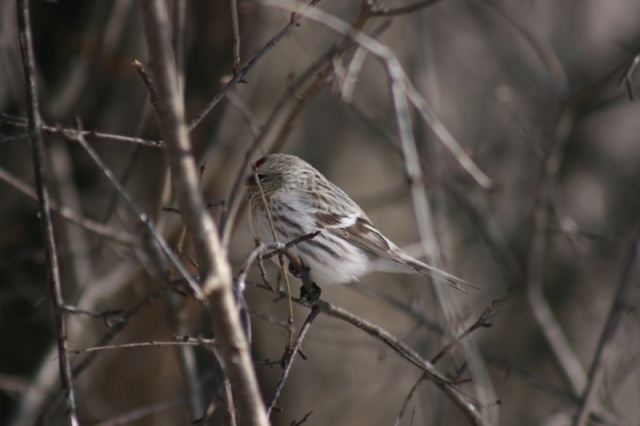 Photo 6. A relatively heavy and dark flank streaked female ssp. exilipes Arctic Redpoll. This bird fits comfortably in the Arctic Redpoll range for me. Undertail and rump look clean, flank streaking is on heavier side. The mantle is frosty and wing bar wide and white. Bill is hard to see, but it looks quite small. It’s great to learn to look at redpolls in less than optimal conditions such as in this pic where the face of the bird is partly concealed. Photo Andy McGann Ontario, Canada February 2013.

Photo 7. Here’s a second and different ssp. exilipes Arctic Redpoll. Bird has wispy flank streaking, very small bill, and frosty-ish back. The mantle of ssp. exilipes birds often has a brownish-white or gray-white appearance – the frosty edging gives it this look.  See next photo for more of the same bird. Photo Andy McGann Ontario, Canada February 2013. 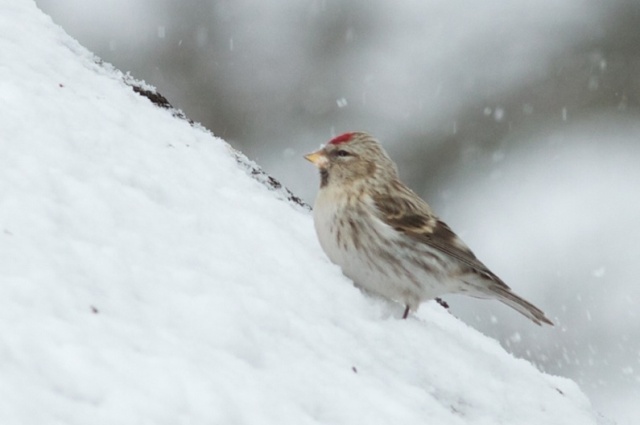 Photo 9. A controversial bird but is likely an immature female ssp. exilipes Arctic Redpoll, but this bird will surely cause divisions in the ranks. Bird stood out when seen live next to other birds, but again is a bird that many will fall on different sides of the ID line… mantle was moderately frosty, few thin undertail streaks, wispy flank streaking, but bill does look on the larger size. Tom Johnson Cortland, NY February 2013.

Photo 11. Thought to be the same bird as above (in center with legs up). Notice chunky size and completely white undertail coverts. Photo Jay McGowan Cortland, NY January 2013.

Photo 13. Thought to be the same bird as above bird. Photo Patrick Tanner Cortland, NY February 2013.

Photo 14. Thought to be the same bird as above — A female Arctic Redpoll, ssp. unknown. The bird is slightly fluffed up in this pic, making it look even whiter and larger, thus suggesting ssp. hornemanni.  Photo Luke Seitz  Cortland, NY February 2013.

Photo 15. Yet again thought to be the same bird as above — A female Arctic Redpoll, ssp. unknown. We’re looking at the other side of the bird in the photo. Photo Jay McGowan Cortland, NY February 2013.

Photo 16. Very likely the same bird as in the next 3 pics (different individual than in preceding photos). Looks quite large. Clearly an Arctic Redpoll, but which subspecies? Photo Luke Seitz Cortland, NY February 2013.

Photo 18. Arctic Redpoll. The same bird, but with this angle the bill doesn’t look quite as broad? Different angles are notorious for making the same redpoll look larger, whiter and/or broader billed. You need to get many looks. Photo Luke Seitz Cortland, NY February 2013.

Photo 20. Bird facing forward back center — Northwestern Redpoll ssp. rostrata. Bird is large with several rows of dark flank streaks. Black bib is usually quite extensive like on this bird as well! The longer black bib when seen face on can often give bird a ghoulish appearance. Photo Andy McGann Ontario, Canada February 2013. 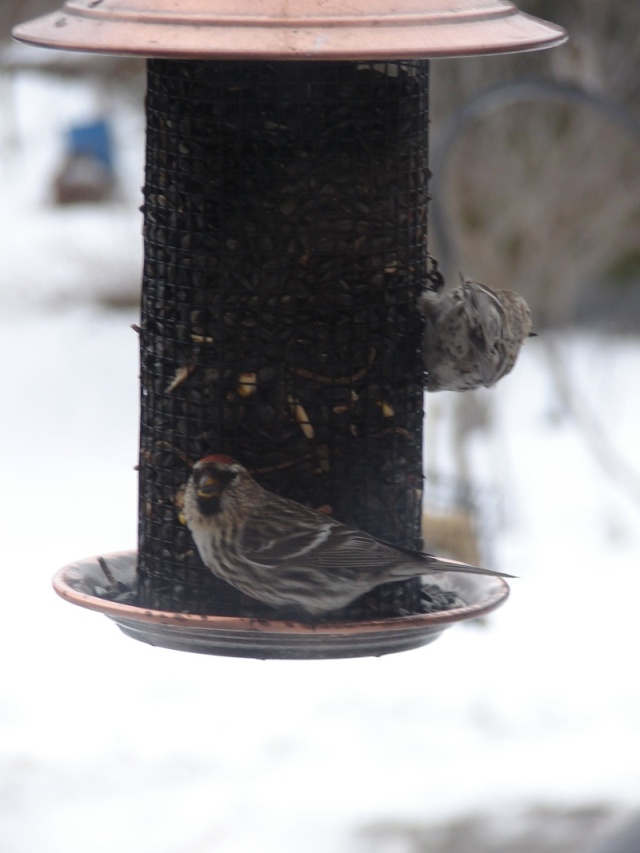 Photo 30. This photo is a duplicate photo of a ssp. exilipes Arctic Redpoll already used in Photo 3, but is provided again as a chance to perhaps examine differences in size and posture of the two ssp. of Arctic Redpolls? ssp. exilipes Arctic Redpolls almost always look like whiter than Mealy Redpolls – they are basically the same size with the same structure, whereas Hornemann’s type birds, whether these meet the criteria or not, always seem to look bull-necked, hog-nosed and beer-bellied structurally. 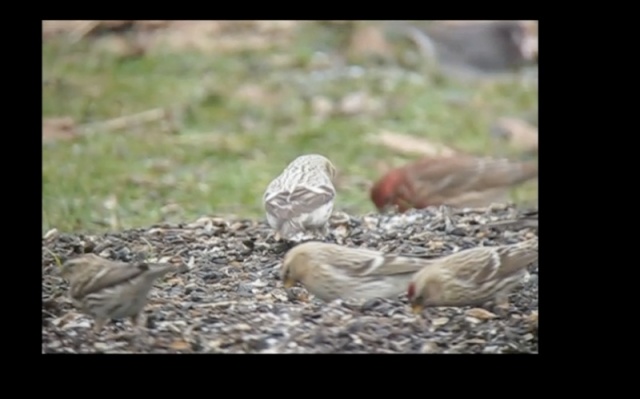 Photo 31. The bird to focus on here is the bird in the front to the extreme right (The other two redpolls near center of screen are Arctic Redpolls). I saw this bird several times over the 3-week period and I never knew quite what to call it. It always looked a bit frostier and a bit bigger than any of the other Mealy Redpolls, but it had a weird fawn color to the mantle, and overall was browner in wing color than the other birds. The bill shape and color never looked like a good match for ssp. exilipes Arctic Redpoll, which I did try to turn it into several times. Photo Andy McGann Cortland, NY February 2013.

Photo 32. Here’s the same bird as above front right. Look at how the flank streaking is quite dark and extends to rear flanks, which is again unlike the most Arctic Redpolls. Photo Andy McGann Cortland, NY February 2013. 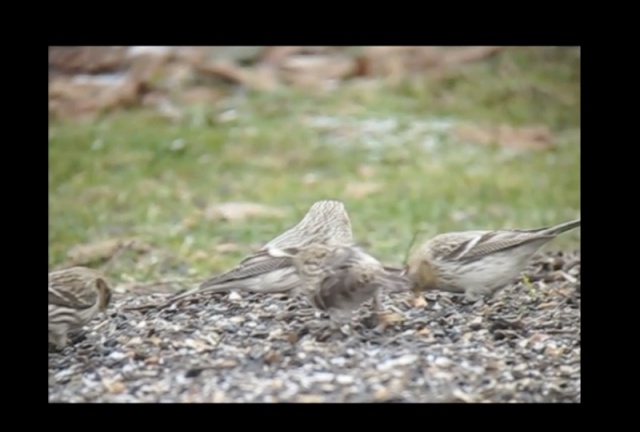 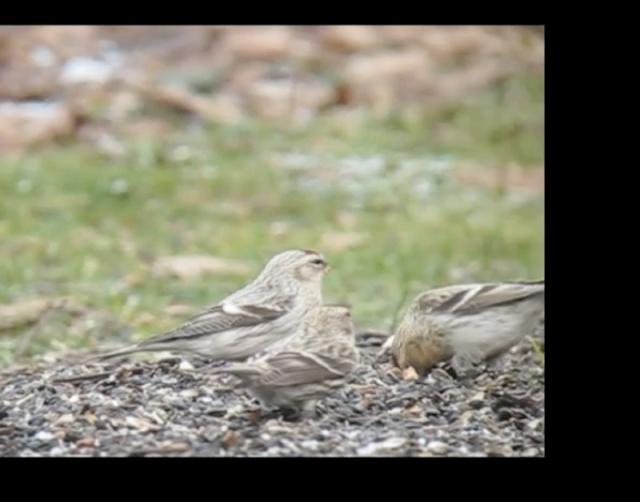 Is this perhaps a ssp. islandica Northwestern Redpoll?  Well-known redpoll expert, Andy Stoddart examined these pics and said the following :

“is long-bodied, rather plain and buffy around the face, a strange grey-fawn
colour above and well-streaked on the rear flanks but on a clean white
background. It seems to share characters of both ‘Arctic’ and ‘Common’ type
redpolls. I agree that it doesn’t look like ssp. flammea, either in terms of
size or plumage….. so what is it? If it really is as large as it looks (more
on this below) I think there are only two real possibilities – a pale ssp.
‘islandica’ of the well-streaked ‘mid-range’ type or (if such things exist
at all) a hornemanni/rostrata hybrid. Of course some islandica may look as
they do because of gene flow between a dark and a pale form so the two
scenarios are not that different. I’ve not heard of any confirmed
hornemanni/rostrata hybrids, though there is a mention in the literature of
a copulating mixed pair in Greenland. Unfortunately the outcome of this
particular mating isn’t known as both birds were shot!

So, on balance a ‘mid-range’ pale Iceland Redpoll seems a plausible
suggestion (unless the bird isn’t really as big as is suggested) and I might
tentatively identify it as one in northern Scotland. Unfortunately you’re in
the US! However, given that redpolls seem capable of turning up anywhere (eg
a ssp. flammea from Michigan to Siberia) I guess it’s not impossible”

Is this a first record of ssp. islandica in North America?  I had sent this on for review because I thought it matched the subspecies well. The cautionary tale in all this though, is at least one of the two Arctic Redpolls in these last photos was first thought to be ssp. hornemanni. However, one can see a House Finch in the background, and most Hornemann’s Arctic Redpolls are thought to be larger than House Finches. Near the end of February a banding crew came to the house, and we caught a few Arctic Redpolls. At least one of them was thought to be a ssp. hornemanni (matching one of the above birds), but when measured the wing chord didn’t match that subspecies, although it was towards the higher end of ssp. exilipes (75mm).

At least 7-8 different Arctic Redpolls visited my feeders during the 3-4 week period. Some are still occasionally visiting including the above islandica type bird. Additionally, there were at least 3 different ssp. rostrata Northwestern Redpolls in my yard along with a “presumed” different ssp. hornemanni bird that we did not catch (see above Photos 28-29). At the very least there were 3 good subspecies that visited the yard, with perhaps 5 different subspecies present. Just about everyone that has looked at Photos 28-29 have agreed with the ID of ssp. hornemanni, but without measurements can one be sure? Small ssp. hornemanni birds can be the same size as larger ssp. exilipes birds (and therefore smaller than House Finches)…….small rostrata and islandica birds can also be smaller than larger ssp. flammea and exilipes birds. One can separate the vast majority of redpolls without measurements, but when possible, birds should be measured and matched to plumage characteristics.

In short though, it was a great winter where I continued my lifelong on-going education in redpoll identification. Lastly, I’d like to thank Martin for giving the opportunity to share this with everyone.

Matthew A. Young has lived in Central New York the past 15 years and now resides in Cortland, NY. Matt received his B.S. in Water Resources from SUNY-Oneonta and his M. S. in Environmental Forest Biology (concentration in Ornithology) from Syracuse University in 2003. Matt is very active with various Land Trust and Conservation groups in getting land protected for birds and rare wetland plants. He was an Adjunct Professor at SUNY-Cortland and now works at the Macaulay Library of Sounds as an Audio Production Engineer at the Cornell Lab of Ornithology. He’s published several papers on finches, most specifically on the Red Crossbill vocal complex of North America. For his latest on the NA crossbill complex see here: http://ebird.org/content/ebird/news/red-crossbill-types

I am a Free Spirit
View all posts by Martin Garner →
This entry was posted in Finches. Bookmark the permalink.