Yes it was a tad tricky. Well done to all who braved having a go. Hopefully you had a laugh too, at least at some of the wry comments. And the answer?

Circled: an adult (probably male) grey morph Gyr Falcon flying away. Several people guessed Gyr Falcon correctly even if it was described as perched somewhere else in the photo! Thanks to all for having a go. I knew it was a tricky one but hopefully good fun was had. Ben Ofield was the first to correctly name the right species. Well done also to Craig Nash, Pete Lewis, Chris Wood and Danny Camerlinck. Jaap Denee wasn’t first but described most clearly that he could see the bird in the image and identify it, so perhaps at least it wasn’t impossible (see Facebook Page)

Here it is a bit closer

Thanks to precious friends Tormod and Elin, I have been fortunate to see grey morph Gyr’s on each of the last 3 trips to Varanger in Arctic Norway. Hornøya Island has been best spot with up to 3 birds hunting there regularly this year during the Gullfest. 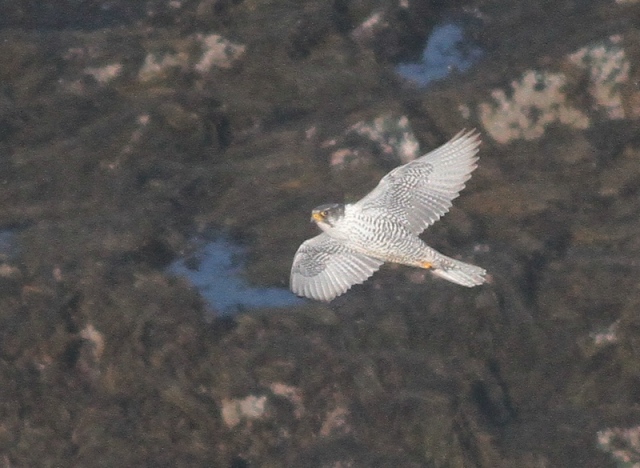 2) lovely even and conspicuous, well-marked barring on soft grey upperparts

Sometimes birds and mammals are a long way off. Too far for a DSLR. Even stretching it for digiscoping. Here’s a couple off longer range efforts. These definitely fall into the ‘record shot’ category but worth it I think because of the highly prized target species.

Taken with Canon S95 Camera, attached to Swarovski DCB II Digiscoping Swing Adapter on Swarovski ATX 95 telescope. These 2 were highly active, would land on rocks separately and together and soon fly off again. It was very cold and very windy! So I had very little time to set up a stable tripod and so I have happily settled for slightly shaky video at long range- rushed in recording just to get something. I think I could have improved it by placing the bird on the right of the image and getting less harsh reflection off their white underparts (bright sunshine). The larger presumed female at the back looks huge don’t you think?

A way in the distance off Hornøya, but clearly visible through ‘scope’ the challenge was knowing where they would surface each time. Rather than zoom in close and record nothing, I took a wider angel view in the hope of recording something while  you can hear Pierre gave a commentary (new species for him). Looks like a big male surfacing near the end of the clip.

White Morph Gyrs in Varanger too?

This Gyr Falcon was photographed whizzing past him in Vardø by Tormod Amundsen. Birds from the Kanin Peninsular and eastward into western Siberia include white morphs and are sometimes separated as ssp. intermedius. Perhaps another example of the Siberian-esq flavour of some of the bird species and subspecies which occur in Varanger. We are building up quiet a list! 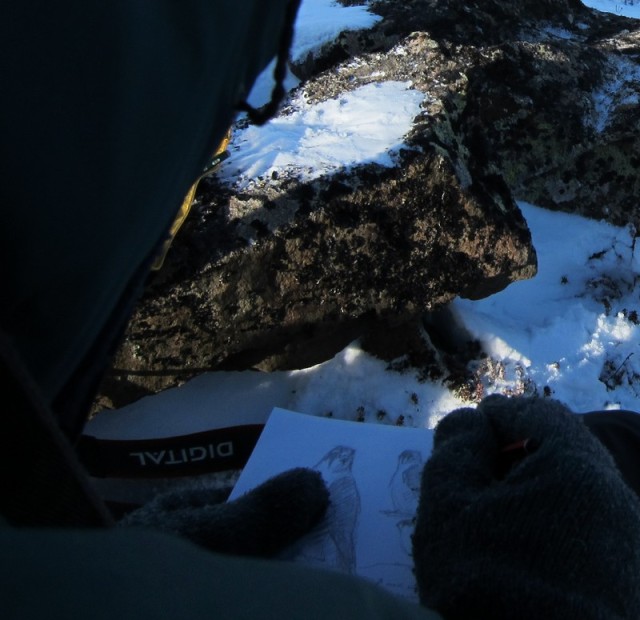 More than one way to capture the moment: Ian Lewington sketching Gyr Falcons in the freezing cold. 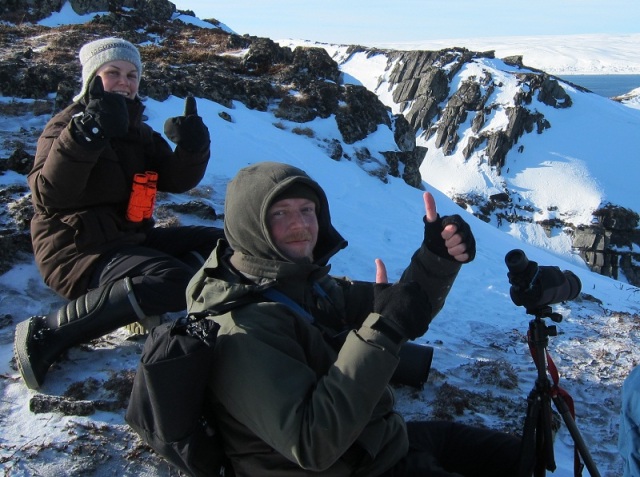 I am a Free Spirit
View all posts by Martin Garner →
This entry was posted in Arctic Norway, Raptors, Varanger. Bookmark the permalink.