This is a topic I talked about briefly in my 2015 Spurn Migfest talk. Saunders’s Tern is one of the rarest and least-known breeding birds in the WP. Despite having a large range around the Indian Ocean, including Red Sea, coastal East Africa, Arabia and Indian Subcontinent, it is still a poorly-known species worldwide. ID of adults in summer is better described. Compared to its sister Sternula species, Little Tern, it is smaller and slimmer. Seeing them side by side (I have seen two in Israel alongside Little Terns), you get a similar comparison to Common versus Arctic Tern in differences in size, structure and derived flight pattern – about 10% smaller and more delicate, and flight more light and bouncy. Calls are also different – check the Xeno Canto page with lots of variation in call but the mainstream seems to be softer and less coarse than Little Tern. Some plumage features seem to be rather robust – first of all, contrary to what some birders may think, adult summer saunders’s are paler above than adult little, very pale silvery-white. They have a larger dark primary patch, usually 4-5 dark primaries, compared to the normal 2-3 dark primaries in adult littles. Also, littles have a contrasting white rump and tail, at least the outer tail feathers (apprently greyer central tail feathers are quite normal in Little Terns). Saunders’s has concolorous (pale) grey mantle, rump and entire tail. And that’s it more or less. All the other features mentioned in literature are of unknown validity, mainly becuase the limits of variation within Saunders’s Tern, even adults in summer plumage, are little known.

But that’s not the only reason why separating these two species is challenging. Interestingly, the amount of variation shown by adult summer Little Tern, which is such a familiar and popular European bird, a photographer’s favourite, is not well described. More on this below.

My interest in them increased a few months ago. I noticed this Saunders’s-type tern in a blogpost of my good friend from kuwait Mike Pope from late April 2015: 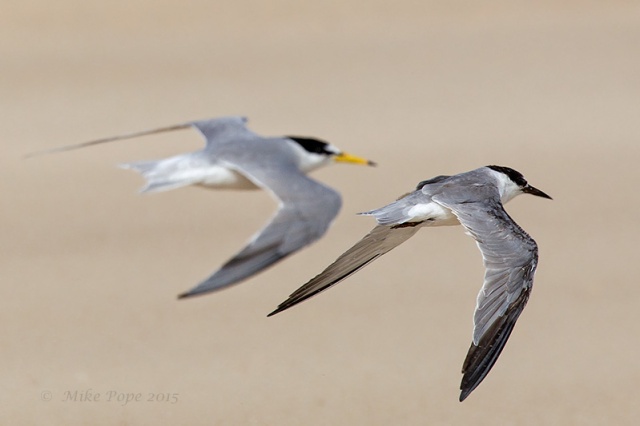 This bird made some alarm bells go off – look at this broad wing patch (4 parimaries), concolorous rump and complete grey tail – this must be a Saunders’s Tern, no? I flagged it up to Mike, he circulated among some experts, and the views were leaning towards Saunder’s tern – that would have been a long overdue first for Kuwait.

But then the plot thickened. I circulated Mike’s report among my fellow IRDC members. Yosef Kiat has been ringing Common and Little Terns for several years now in a breeding colony at Atlit, south of Haifa, on the Med Coast. He sent me some images of Little Terns from the breeding colony this late summer that knocked me off my chair. I was aware of the variation they show there, I did join him several times on his nocturnal adventures there, but have never seen extreme birds like these. First, a 2cy bird – this bird hatched in the colony to ‘normal’ looking Little Tern parents in 2014, and was retrapped this year:

Look at the grey rump and tail: perhaps outer tail feathers are slightly paler than the heavily abraded and dirty central tail feathers, but I am sure in the field this would look like a solid grey tail.

Hmmm…. Grey rump, grey tail… And the wing looks like this – in the field it would look like a huge dark wedge:

Also this summer, in June, Yuda Siliki, an Israeli birder sent me this nice comparison of Little Terns from Ma’agan Michael – these birds are from the same colony in Atlit. Check out the variation in supposed features for Saunders’s Tern – shape of forehead patch and extent of dark bill tip. Saunders’s has much more limited white foreahead, not unlike the lower individual, but the white patch needs to more squared off in saunders’s, less of a supercilium above and behind the eye, but still check the amount of variation among the two. Also, what about the amount of dark on the bill tip? Saunders’s should have more extensive dark than little, so what’s going on here?

I think it is very interesting to explore this species pair now. They were found breeding only recently in southwest Sinai, just 150 km away from the Mediterranean. For a long-distance migrant to hop into the Med is no big deal, and then it could practically turn up anywhere around the Mediterranean. An adult in summer plumage should be possible to pick out among Little Terns, but what about a young bird? and a non-breeding bird? Headache. If you read carefully Klaus Malling Olsen’s tern book he does state that in non-breeding and juvenile plumages it would not be safe to separate the species. With the circumstancial evidence provided here I tend to agree, but it is hard for me to accept that they cannot be separated. There must be something out there to teach us.

This is how some Saunders’s Tern breeding in Sinai look like – many thanks to Rich Bonser for allowing me to use his brilliant pics. Adults have a nice prominent wing patch, but only three dark primaries here. Is it moulting? Unclear. It has a small forehead patch, that doesn’t extend above and behind the eye: 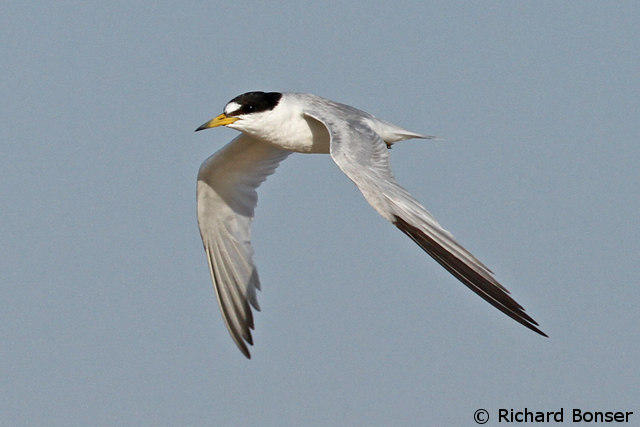 This bird in better light conditions does show the rump and tail pattern nicely. It is in active primary moult, so wing patch much reduced here: 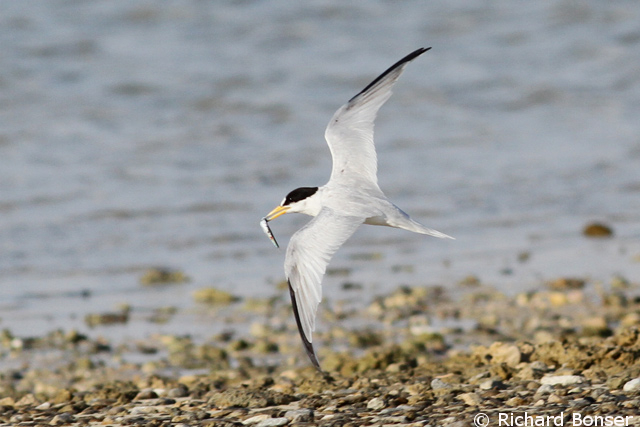 More extensive white forehead patch here, but again does not extend back above eye:

Very pale silvery white above. Solid dark bill tip as in all photos. There is some talk about Saunder’s having duller leg colour but I think this feature is not worth much. This is so dependent on the hormonal condition the bird is in during breeding. Also bill tip must change according to breeding condition? 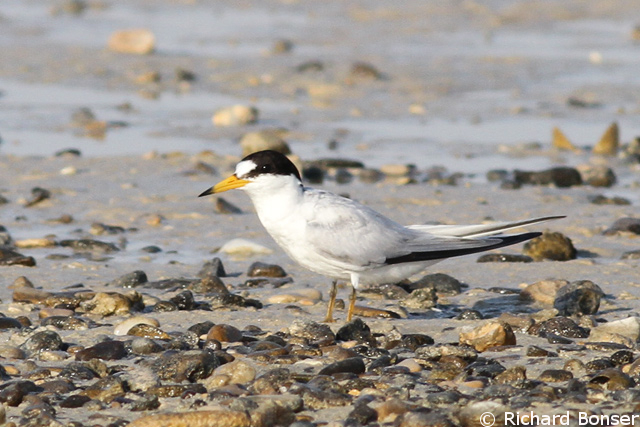 That’s a 1cy. I do not know if the colony at Ras Sudr is mixed with Little Terns or not, but in Rich’s blog this is a 1cy Saunders’s Tern – I will go with the flow. Not dissimilar to the Atlit 1cy Little Tern above? Pretty pallid bird but extensive wing patch. Greater and lesser primary coverts very dark here, but is it different to how the Atlit 1cy would look like in the field? I am not sure. 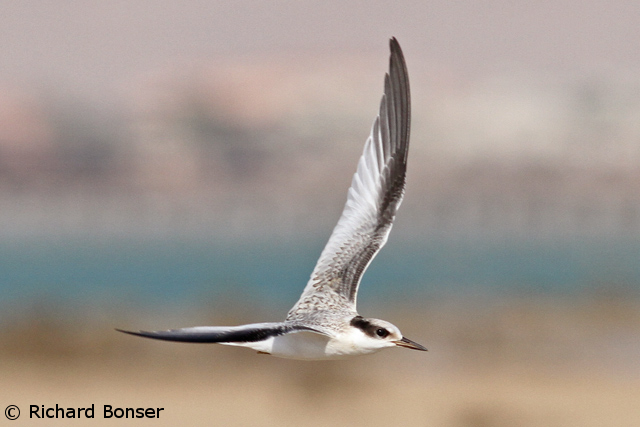 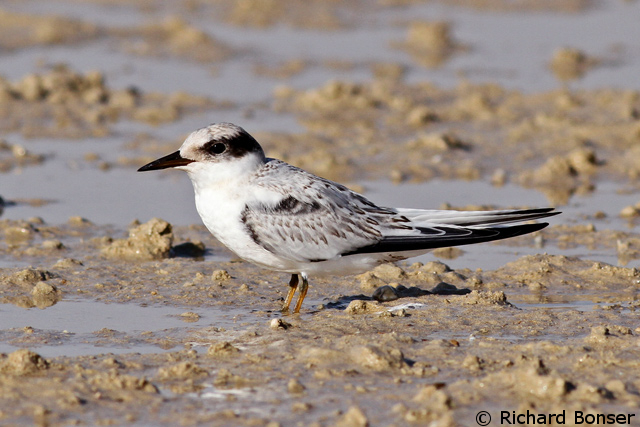 It would be great to study the amount of variation the Sinai Saunders’s Terns show in key features like forehead patch, bill tip and tail pattern. Also how many dark primaries do they have before moult?

One incredible place to study Saunders’s Tern in non-breeding would be Kenya. I visited Sabaki river mouth, north of Malindi in December 2010. There is a roost of hundreds of thousands of Saunders’s Terns (!) there during the northern winter. I was there at daytime so there were only few thousands… But they were all distant, and scoping them into the sun didn’t provide me with much insight on their ID. I wonder if anyone rings them there, or at least photograhps them.

But one very important piece missing in the jigsaw is how much variation ‘our’ Little Terns show, in adult summer plumage and also in other plumages. Does this variation that I have shown here in Israeli birds occur in northern populations as well? The Little Terns I have seen here in the UK looked all bog standard, but I didn’t study any juveniles. I guess that few 2cy Little Terns return in summer to N Europe? Would be great to get some feedback from ringers and birders with field experience.